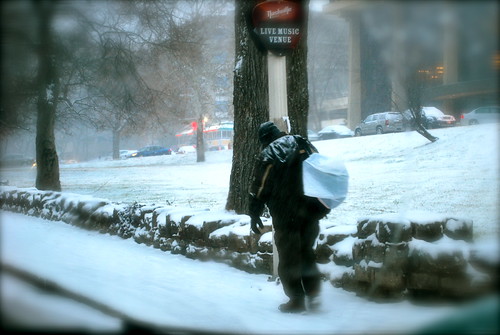 Good morning, Nashville. So how about that snow last night? And that commute? We don’t even want to talk about that commute, really. Though only about 1-3 inches of snow coated the city, the roads turned into a sheet of ice within minutes and reportedly left many folks sitting in rush hour traffic for 4-5 hours. Cars were left abandoned on the side of the road (and in the middle of the road?), dozens of accidents were reported and police were forced to only respond to injury wrecks, of which there were plenty. Because salt only melts snow down to about 26 degrees and it is 9 degrees as we write this, we don’t expect to see things clear up much this morning and police are urging commuters to stay home. Also, if you strike out to find the car you ditched yesterday and isn’t where you left it, it’s probably in Metro’s impound lot. Contact them at (615) 862-7800. You’ll also want to plan on shelling out a $10 fine plus towing costs.