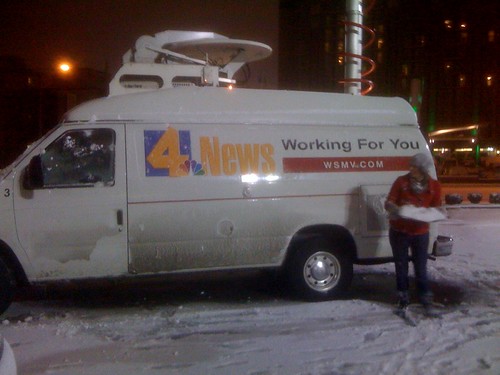 As we’re sure you know by now, it snowed last night in Nashville. And snow can only mean one thing, other than the bread & milk shelves emptying out: It’s time for a citywide snowball fight! (Okay, so snow can mean a lot of things, especially in Nashville, but we’re prioritizing.)

We attended an impromptu snowball fight last year in Centennial Park, and magical things happened. A mythical beer truck may or may not have provided belly-warming nourishment. We ambushed news crews with snowballs. We slid on cookie sheets pulled by bicycles. We pub-crawled afterward. We made a bunch of new friends. At a citywide snowball fight, all your wildest dreams can come true.

So! Join us tonight at 6pm-ish in Centennial Park for the first citywide snowball fight of 2011, if you can get out of your driveways. If you’re for real snowed in, start throwing snowballs at your neighbors and see if you can’t get some fun started of your very own!