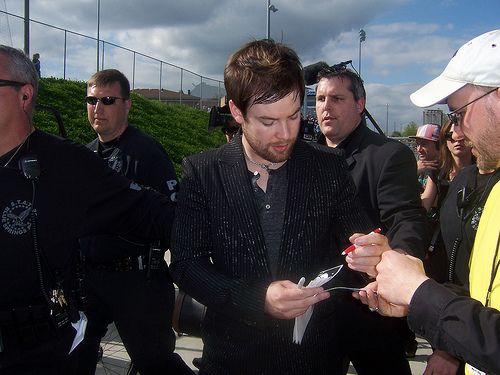 Unless you’ve been living under a rock, you’re well aware that last night was the much anticipated wrap-up of American Idol’s 7th season. David Cook came out way ahead, and most of the world rejoiced. In the past, Nashville has had great representation on the show, producing the likes of Kimberly Locke, Mandisa, and Melinda Doolittle. And if they didn’t live here before the show, many of the winners have since set up camp in Nashville after getting record deals or simply out of some masochistic desire to join the ranks of up-and-coming musicians wearing out the karaoke circuit around town.

We’re happy to tell you that we can claim a piece of this season’s pie, too. Even though Cook’s performance of the song “Time of My Life” had us swooning last night, we had no idea it was written by one of our own, Nashville native Regie Hamm. The story is pretty heartwarming: Hamm’s wife works at Starbucks while he stays home to take care of their daughter Isabella who has something called Angelman Syndrome (a disorder that causes severe developmental delays), and it’s been a rough couple of years for them. Anyway, last night’s Idol was the big break he needed to jump start his songwriting career. So thanks, Regie, for giving us something else to brag about.