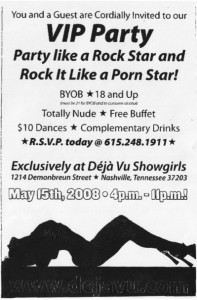 Our favorite blogging member of the Tennessee House, Rep. Stacey Campfield, set the internet rumor mill on fire last week when he posted about an alleged reception for Tennessee lawmakers at Deja Vu Showgirls strip club downtown. The story is that the Tennessee Cabaret Association’s lobbyist Tracy O’Neill (who also lobbies within the Metro Nashville government) was handing out invitations for the party at Legislative Plaza, which sported the tagline “Party Like a Rockstar, Rock it Like a Pornstar” and promised lots of nude girls, free drinks, and $10 lap dances. After leaving invitations with “friends and colleagues” including a couple of legislators, she insisted that the Cabaret Association has nothing to do with the event and it isn’t a legislative reception, which would be a violation of Tennessee law. We’re sort of not buying it.

Rep. Campfield got wind of the get-together and announced on his blog that he wasn’t invited. Kleinheider has the rest of the story at the Nashville Post, and conveniently snagged a scan of the actual invite. Anyway, the controversial bash happened Friday night, and we’re still waiting to hear who showed up.