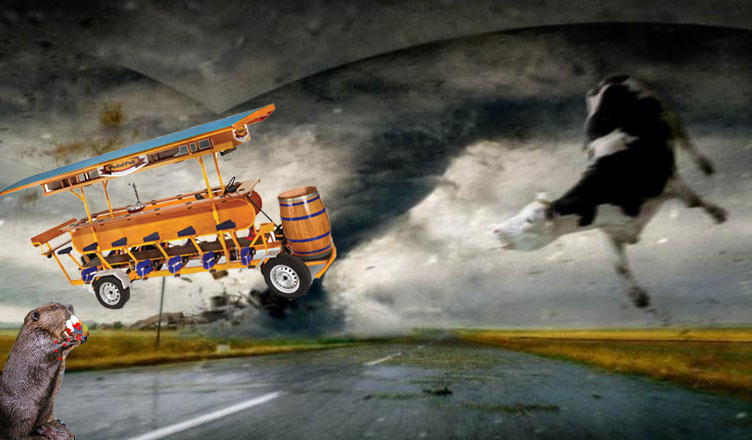 Editor’s Note: You might have heard about this afternoon’s severe weather forecast. While news outlets are now saying that they expect it to be less severe than originally thought (Metro schools are closed today), it is still a good idea to know how to prepare for the worst. Lesley takes a look at what you need to know for this time of the year in Middle Tennessee.

Tornado season in Tennessee is usually March, April and May as well as November. Enjoy the unseasonably warm weather, but understand that it comes at a price. Damage from tornadoes (“ternaders”) is pretty rare, but it helps to be prepared and have a plan.

So, the weather forecast predicts strong storms and possible tornadoes

A building: Identify a “safe place.” A basement is best, but if you don’t have access to one, go to a room in the center of the structure (near support walls) that does not have windows, such as a hallway or bathroom. It’s tempting to watch a storm come in, but windows are made of glass and they will cut or kill you when they shatter. If you are in a mobile home or trailer, leave. Go to a permanent structure or a car (which the Red Cross says is safer than a mobile home).

A car: This is not optimal (but better than a mobile home or trailer). If you are in a car, drive away from the storm and try to get to a building. If you can’t do that and a tornado is headed your way, put on your seat belt and crouch forward to protect yourself from glass or get out and head to a ditch if possible. Do not park or take shelter under an overpass.

Outside: Get inside a building! Or find a ditch or low-lying area, hit the ground and put your hands and arms over your head to protect it.

2. What should you have with you in your safe place?

If possible, it’s a good idea to have a heavy blanket, cushions, or even a mattress to cover yourself in case of falling debris. If you have small pets, try to corral them into a pet carrier. Avoid doing this if the risk to your life is greater from trying to get your cat into a pet carrier than from the tornado.It’s also a good idea to have a battery-powered radio (they actually still sell these!) and a back up power supply for your phone. Make sure that both the batteries and the back-up power supply are functional.

A tornado watch means that weather conditions are favorable for a tornado. A tornado warning means that a tornado has been spotted by either a person or rotation (swirling winds) have been indicated on weather radar by meteorologists.

You hear sirens; What now?

Again, don’t panic. The sirens mean there is a tornado warning for an area within the county (Nashville Severe Weather has more, including an explanation of “the polygon”). That could mean that there’s been rotating winds spotted on radar near Joelton, but if you’re in Cane Ridge, you’re not in imminent danger. If you have power, tune into a local TV station to find out the path of the storms (and enjoy discovering the colorful names of nearby communities) and/or follow Nashville Severe Weather on Twitter. You should follow them anyway and check out their website for forecasts (because the app on your phone is probably garbage).

If you are in the path of a storm, get to your safe place (see above) and try to stay connected to weather reports.

So, now that you know how to deal with the threat of a tornado as a responsible person, here’s what natives know about tornadoes. It’s not necessarily scientific.

Oh, hail. Hail often accompanies tornadoes because the same types of clouds and circulation cause both. Hail is mostly observed outside (and to the north) of where tornadic activity occurs. If it’s hailing where you are, stay inside and away from windows, but know that you’re probably not going to experience a tornado (yet). If reports of hail are coming from an area north of where you are within 1-2 miles, that’s not good.

Train, train... We’re all told growing up that a tornado sounds like a freight train. If you are nearby railroad tracks, this may not be helpful. But do listen for the sound of a roar that builds like an oncoming train (and get in your safe place if you hear it!).

The darkness. Another indicator is a sudden darkness in the middle of the day from the storm clouds. It’s sometimes an odd color of dark gray, with a bit of a green hue, which is attributed to hail. This is good to know if you’re in an area where it’s not easy to see a wall cloud headed your way.

Sudden calm. This is the scariest part to me, personally. If the winds have been heavy and there is a sudden calm (while the sky is still dark) followed by a heavy wind from a different direction, that is bad. It’s a good indicator that there’s a tornado close by.

That smell. I don’t know about other natives, but I can just smell a storm that has the possibility of a tornado. During the fall tornado season, it often smells like salt as winds blow heavily from the Gulf of Mexico. In the spring, it just smells … different.

Flying cows. Or flying debris of any sort (particularly in a rotating motion!) means there is a tornado near or on you. Seek shelter/cover.

Additionally, here are some myths de-bunked. Yes, I’ve personally observed that hills seem to break a tornadic pattern, but science doesn’t support that.

The most important thing to do during tornado season is to stay informed. Tune into a local TV station for weather, enable alerts on your mobile phone and/or install a severe weather alert mobile app, and follow Nashville Severe Weather on Twitter so that you can have the most current information.