It’s Czann’s, the C is silent. Or as owner Ken Rebman told us, “The C is zilent.”

Four years old next month, Czann’s was the first brewery to take a bet on SoBro, the area south of Broadway in downtown Nashville. And Ken literally built the place with his own two hands. For the first six months of operations, he did everything by himself: brewing, sales, and keg delivery.

Czann’s is a true labor of love.

“This is about the closest thing you’re going to find to homebrewing in town,” Ken told us. “When I’m in the brewery brewing, I’m brewing.”

You’ll also find seasonals like porters and stouts, and occasionally special IPA’s made with different hops in small quantities.

While they have what Ken calls “munchie” food at the taproom, they also have pizza from Germantown spot 312 Pizza. THey make a thin crust pizza for Czann’s, cook them half way, freeze them, and get them to the taproom. From there, Czann’s finishes cooking so you can enjoy pizza with whatever is on tap. 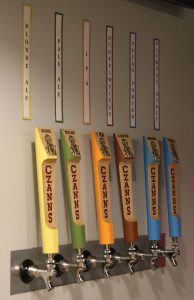 For locals who find themselves in SoBro frequently, say waiting out #ItCity Traffic Insanity, you may want to join the Drinker Club. $30 for the year, and you’ll get a 20oz pour for the 16oz pint price.

If you’re in Nashville on April 12, join Czann’s for their anniversary party. Ken is making a special pilsner for the occasion, which is also their spring seasonal. They’ll have a food truck on site, and drawings through the night for things like free growler fills. Buy a pint, get a raffle ticket.

I posed the same question to Ken I do to all of our brewery friends, what’s the one thing you’d want someone, either local or visiting, to know about Czann’s?

“You’ll also never find us outside of Nashville, I have no plans to expand outside the city,” he told us.

That’s about all the incentive anyone should need, whether you’re visiting or a local, you’ll only be able to taste and enjoy Ken’s beers in Nashville, nowhere else.