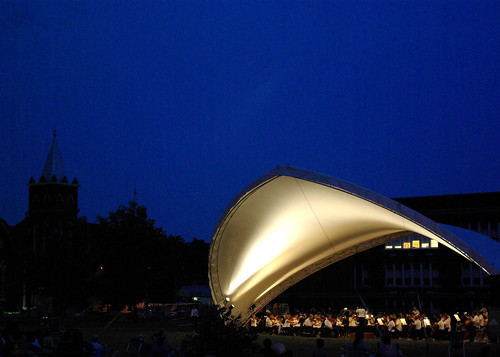 The Nashville Symphony has announced their lineup of free community concerts for the summer season, reminding us once again that it just wouldn’t be summer without them. The block of dates kicks off with a Regions Free Day of Music at the Schermerhorn on May 22, and if you’ve never been to free day at the symphony, you’re in for a treat. Previously held in the fall, Regions Free Day of Music will feature dozens of performances in every nook and cranny of the Symphony Center, showcasing every style of music imaginable and capping off with a free Nashville Symphony performance in the main Laura Turner Concert Hall.

The rest of the summer will see the Nashville Symphony heading outdoors to perform at parks around the area for their annual lineup of free Regions Community Concerts. Pack a picnic and a blanket and cross your fingers for good weather! This year, the symphony will perform a variety of programs in the park – “A Salute to Boston Pops,” “Hoe-Down” and “Russian Fireworks.”

The dates are below and free unless noted, so you can start working them into your busy summer schedules now.

Thursday, June 9, 8pm. – East Park, Nashville
“A Salute to Boston Pops”
Regions will have a video booth where patrons can share their opinions, with footage to be used in a special video page on the Symphony’s website.