Editor’s note: Guest poster Nathan T. Baker is a Nashville storyteller and creative. He blogs at Nate News, your brainstorming session on storytelling and the Internet. When he’s not working at Sitemason or volunteering with  Click Homeless, he’s likely smoothly mentioning his love of Las Palmas as a Nashvillest comment—or in his guest post bio.

Question: How often do you go to Broadway? Stop.

If you need more side streets in your life, try one of these unique sports for instant adventure. Here are some locals who’ve figured it out. 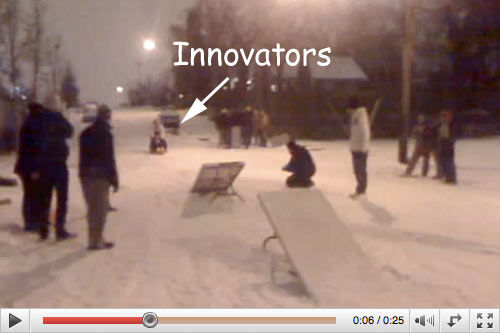 During The Situation 2010 (Nashville’s epic days of snow) a new sport was invented after innovators secured two tables into a snowy Bernard Avenue.

An Official Nashvillest Congratulations From A Guest Poster is given to Lou Manning for sticking the landing, McAllister Green for pushing, and Luke Myszka for capturing the jump on his iPhone.

The Nashvillest girls would say “don’t try this at home, etc.” Lame. Luckily this is a guest post, so I’m going to recommend this to everyone I know, etc.

How to get started: Find snow, put on your elbow pads and helmet, and get after it. Also, expect to fail, as narrated on youtube by your roommate. Angle 2 has the rolling in pain. Perhaps train on very small tables. Be warned. It took nearly 50 attempts from different folks to attain this level of epic. 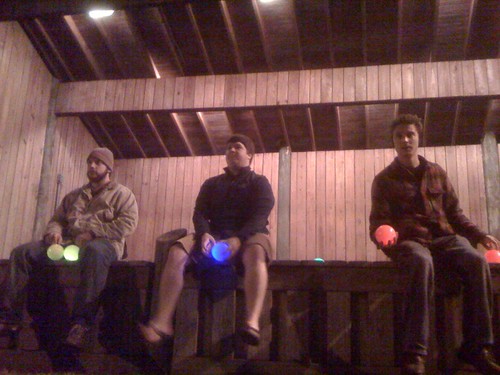 Bocce makes a man or woman look classy, and it’s super easy to learn. Just try to toss your ball closest to the small one. (I know the real terms, but I don’t want to make you feel small.)

Any of Nashville’s parks are perfect for bocce. There are also a few bocce courts scattered around the city, such as at Corrieri Formaggeria on 12th.

How to get started: If you don’t have a friend who keeps a bocce set in their trunk, pick up a set at Target or invest in glo bocce if you’re into night games. Da rules. 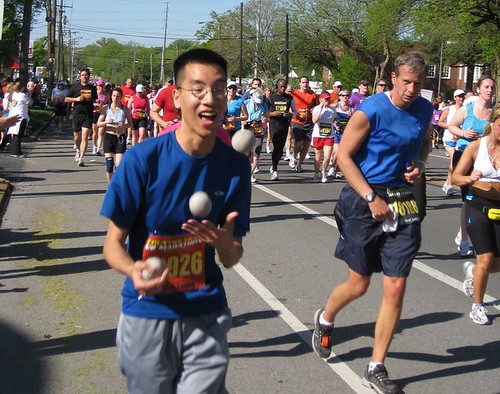 This is Jason Tan jogging and juggling at the same time. It’s called joggling and I’m impressed. If your life has been a waste of space, there’s hope. Show up to your next family gathering running in the door while juggling and you’ve instantly made it.

How to get started: The Music City Jugglers meet Tuesdays at 5:30pm at Centennial Park. Also, check out Nashville Juggling for local resources and links.

Yep, that’s the game from Harry Potter. There’s an active Hume-Fogg group, and more recently a Belmont group, who are practicing above.

Belmont Vision reports “several local schools are listed as having clubs for the fantasy intramural game, including Vanderbilt and University of Tennessee.”

How to get started: I have no idea. Ask wikipedia.

This is Kelly hooping with an LED hoop. Plus fire. My mom just got a hoop. Thanks Kelly. Now she’s going to try this and be cooler than me. Kelly helped train several women to hoop the half marathon with Hooping for Hope last Saturday. (Not with fire this time, but I hope next year?)

How to get started: Hooprama has classes and hoops. 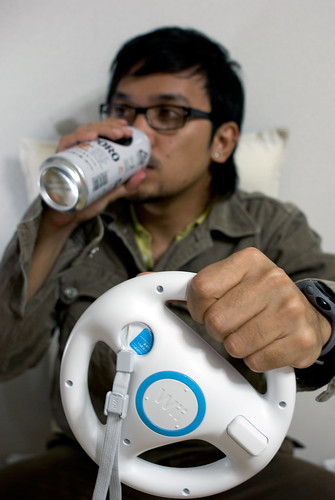 A drinking game has been popular over recent years in Nashville. Grab a beer and challenge a friend to Mario Kart. Finish the beer before you cross the line to win and the catch: no drinking and driving.

Some believe the game—called “Drunk Driving” in some circles—came to Nashville from Birmingham. Beerio Kart players have organized in California and New York, but what may be the first editorial on Beerio Kart comes from Columbia, Missouri where students at University of Missouri have a vibrant Beerio Kart scene.

How to get started: I could send you to Urban Dictionary, which has the rules, but I would rather send you to BEERIOKART.COM. The only problem is you haven’t created it yet. It’s time to add to this culture. If you’re a website developer, I want your ideas in the comments. (International scoreboard and profiles? Something adding to the no-drinking-and-driving theme?) The best idea gets to build out beeriokart.com. You’ll need to publish content as creative commons and link back to this post. Readers, please help by liking up the worthy ideas.

Ever search for images mentioning jowling, faceflap, or ghost punch? (Psst. Those are LINKS.)

Folks have discovered if they loosen their face and swing it back and forth, it makes for wicked-awesome shots. Patrick Moberg and Bill Brown largely popularized the trend when they launched Jowlers.com in 2004.

The co-founders when to school together for a few years at Montgomery Bell Academy, a young men’s prep school in Nashville. If you’re up on your Nashville trivia, yup, that’s the same school that inspired the Dead Poet’s Society screenplay. Some places in Nashville chronically spawn awesome.

I broke this story to my college campus four years ago and I’ll continue to spotlight the innovation of Nashvillians if they keep this up.

How to get started: “1. Loosen all of the muscles in your face and refrain from making any expression.” Add it to the Nashvillest flickr group or it didn’t happen! If you need a challenge, give me a Doric Jump jowling shot. Innovate. Give me wow.

Yes. This is the thing with foam swords. And Yes. I will go with you.

Pictured are friends Heather and Dave sparing. (Thanks Moonwolfing for letting us use your weapons.) I was skeptical at how weird this would be, but after scoping out practice I saw some cool culture going on:

A man was teaching a girl bow skills; What looks like socks are attached as arrowheads. After a giant fur-donning man killed some foes, he walked back to greet the dog hanging out by the tree. Many folks have been playing for years, but are quite willing to teach interested onlookers the ropes.

How to get started: Bring a friend and go to Elmington Park Sunday afternoon. Edge closer till someone offers to let you borrow their weapons. Read up to see what you’re getting into. This and this look like local groups.

I made this one up and this isn’t close to being a sport, but what’s more Nashville than music and biscuits?

How to get started: When they ask “How many please?” respond “Oh we’re just going to pick up a new books-on-tape.” Then proceed to the back right towards the toy instruments section. Bring attractive friends that will make your band shots pop. Add it to the Nashvillest flickr group or it didn’t happen!

Here are some other unique Nashville sports and activities:

What unique Nashville activities did I miss?