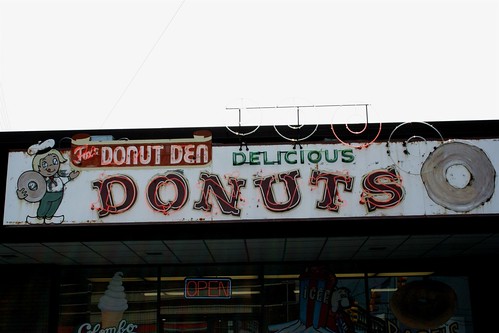 Last week, we all but called for a full-out revolt against the idea of trashing the city’s beloved old Donut Den sign in favor of a new, classier, and way more boring design. And boy, did the people speak! The Green Hills News reports the results, overwhelmingly in favor of retaining the trademark neon beacon of light at the intersection of Hillsboro and Abbott-Martin. And when we say “overwhelmingly,” what we really mean is 977 aye’s and 39 nay’s. Seriously.

The Green Hills News is also leveling with us about why, exactly, the Donut Den’s sign is even an issue in the first place. Though developers are committed to pursuing the option that the community selected, it would seem that since the sign was removed for renovations, replacing it constitutes a “sign change” and makes the Donut Den’s loveable eyesore subject to Green Hills UDO standards introduced in 2003. The debate revolves around whether the Donut Den sign will qualify as historically significant enough to bend the rules a bit, and allow the flashing donuts to keep on keeping on for many more years to come. We’re staying positive and hoping for the best. Great job, team!