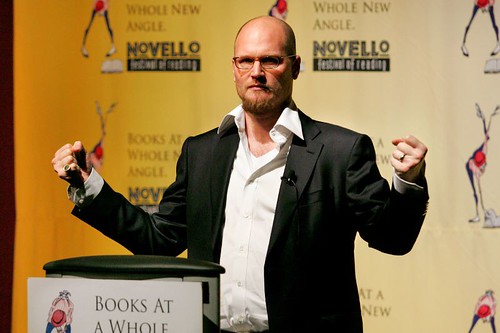 Most of us have read, seen, or at least heard of Augusten Burroughs’ 2001 memoir Running With Scissors which enjoyed a respectable four-year stint on the New York Times bestseller list. And tomorrow night, you’ve got the chance to catch him in person at Vandy’s Ingram Hall for a free reading, discussion, and book signing.

For a fourth-grade dropout, former foster kid, sexual abuse survivor, and recovering alcoholic, Burroughs has done alright for himself. Aside from Running With Scissors, he’s published four other memoirs chronicling his outrageously dysfunctional childhood and his journey in and out of alcoholism in a way that landed him a spot on Entertainment Weekly’s list of the 25 funniest people in America, twice. His first book, Sellevision, is also being adapted into a feature film (and we can only hope and pray they do a better job than they did with Running With Scissors.)

We won’t lie–we’ve been pretty partial to Burroughs for a few years now for the hope and hilarity he brings to the table with his memoirs. We’re also partial to the folks at the Brooks Fund, who will receive a portion of the book sale proceeds from the evening. A very special thanks to Lightning 100, the Nashville Scene, Davis-Kidd, NowPlayingNashville, and Vandy for making it happen.