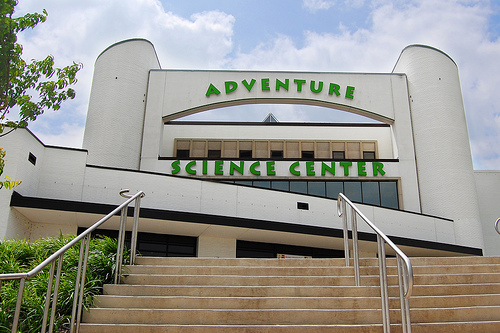 This weekend is the grand opening of the new Sudekum Planetarium at the Adventure Science Center, and it’s definitely something to brag about. The new Chiron star projector is the fourth of its kind, and the first outside of Japan. It projects 6.5 million stars (while the old planetarium’s projector could produce 2,500). We call that improvement.Â

The other highlight of opening weekend is the new Space Chase exhibit wing. This is the new 15,000 square foot addition that allows visitors to moonwalk, among other things. Only the first floor is complete, with the second floor scheduled to open in 2009.Â

Unfortunately, with the new additions to the museum, admission prices are being raised for the first time since 2005. Effective tomorrow, admission will be $11 for adults and $9 for kids, and an extra $4 for planetarium shows. Family membershipsÂ are the way to get a great deal if you plan to visit more than once.