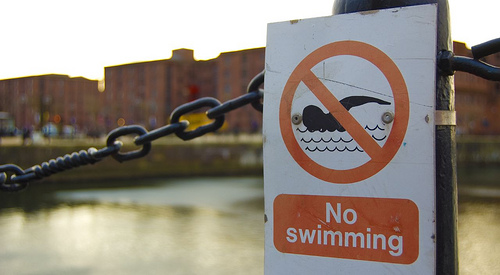 Last fall, five city officials and members of the Metro Council started planning a little swim across the Cumberland to prove to us that the Cumberland isn’t nearly as gross and polluted as we all think it is. It’s been a rough road for the Fab Five, who have faced nothing but controversy since they hatched the idea back in October. The latest in the saga comes to us from the Tennessean, who published a colorful email exchange yesterday between swim captain/Councilwoman Emily Evans and swimteam archenemy/Councilman-at-Large Charlie Tygard. In his letter, Tygard basically outlines every reason why the thinks taking a dip in the Cumberland is a terrible idea, and then Evans does her best to defend herself against his “ceaseless quest” to start fights on the Metro Council. We’re guessing it’s only a matter of time before they pull a Mount Pleasant, but in the mean time we’re reminded of why we love city politics. And we don’t know about you guys, but no one could pay us a large enough sum of money to paddle ourselves across the river.