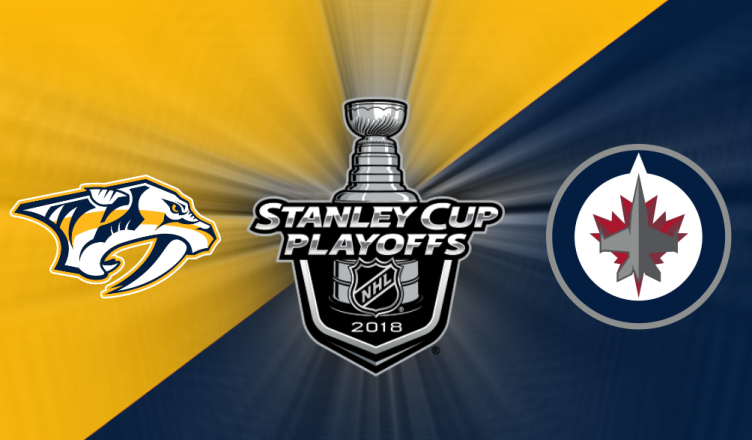 The Nashville Predators closed out the Colorado Avalanche in Round 1 Sunday night, taking the series four games to two. It was the third straight year that the team has won its first round match-up. Nashville took the first two games at home and split the next two in Denver. Nashville missed out on the opportunity to close out the Avalanche in Game 5 when the Avs scored two late-game goals to put them ahead. None of that mattered much in Game 6, where the Predators poured on a 5-0 shutout win against one of the league’s top scoring lines. The Avalanche were playing with their third-string goaltender in net for the final two games of the series. Watch out for those guys next season.

Where to begin with the Jets. They spent a good portion of the year leading the President’s Trophy race before ceding that title to Nashville, finishing the regular season with the second best points total in the entire league. The Predators took the regular season series 3-1-1 in very high scoring affairs. Both coaches have stressed they don’t want to repeat that in the playoffs, preferring that they stay defensive battles. The Jets finished off the Minnesota Wild, going undefeated at home and stealing a game Saint Paul. Patrick Laine (pronounced LIE-nay), the 20 year-old Finish star, lead the Jets with 44 goals in the regular season. That total was good enough for second in the league behind Alexander Ovechkin. The series is likely to garner a lot of attention from Canadian media, as the Jets prior to this season had not won a playoff game, let alone a series, in this Atlanta-turned-Winnipeg version of the team.

We would love to tell you how to get tickets, but if you do not already have them, it’s going to be tough. A word of caution before buying online or on the street corner, though: scammers regularly dupe folks into paying for bogus tickets. You should make sure that you are either buying from someone you already trust or directly from the team.

Note that the Predator’s regular season broadcaster, Fox Sports Tennessee, is done for the year after the first round with the NBC family of networks taking it the rest of the way. You can catch a post-game special if you miss their smiling faces.

Don’t have ticket? The team will have outdoor viewing set up for home games at nearby Walk of Fame Park, weather permitting, starting at 4 p.m. the day of the game.  You can also watch the away games for $10 at the arena ($5 for season ticket holders), with proceeds benefiting the Nashville Predators Foundation.