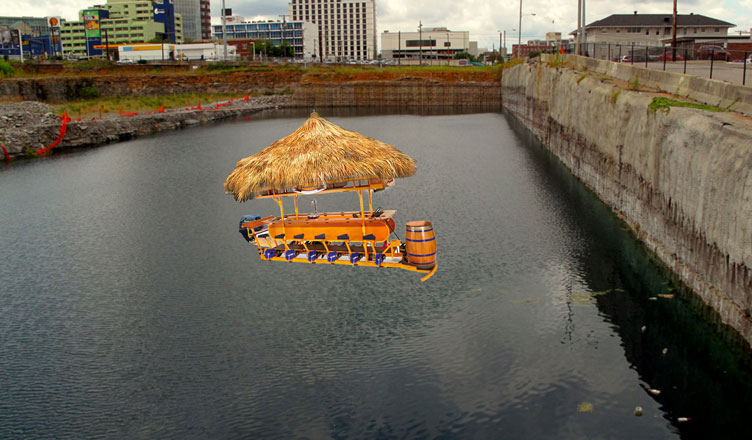 Ten years after West End Summit was scheduled to open, the beleaguered development site turned man-made lake is finally opening to the public. But, not in the way that anyone could have anticipated: Lake Palmer is getting a pedal tavern.

Palmer originally envisioned West End Summit as a state-of-the-art mixed-use office and apartment building, but stalled in the wake of the 2007 financial crisis. In 2012, the project was restarted with HCA signed as an anchor tenant, but this too faltered as financing fell through — leaving an 85-foot-deep hole at the split of West End and Broadway, now documented on Google Maps.

“I won’t lie, seeing the West End Summit site show up on Google Maps as ‘Lake Palmer’ hurt. But, then we got to thinking: Why not lean into it? Tourism is booming in Nashville, and we’re not going to be left behind.”

Lake Palmer Paddle Tavern will operate similarly to the Pedal Taverns that roam downtown Nashville. Between four and ten people can climb onto a modified paddleboat with a centralized driver, who steers the vehicle. The party then peddle to make the vehicle move, drinking BYOB alcohol and stopping at destinations around the lake.

Over the past five years, Nashville’s downtown strip has seen an explosion of mobile bars and taverns, dotting Broadway with rockets, party bikes, and even the occasional tractor. These bars have been a hit with bachelorette parties, who flock to Music City in numbers that rival Las Vegas, but a thorn in the side of locals along these party routes.

“The beauty of our plan is that because these paddle taverns aren’t on the roads, we can stay open all day. While these landlubbers are twiddling their thumbs, every bachelorette party from Newark to Nevada will be sipping Mai Tais in our party pond,” he boasted. “Why huff and puff down Broadway, when we can bring Broadway to you?”

In addition to being filled in the rest of the way with water, Lake Palmer will also add floating outposts of Jimmy Buffett’s Margaritaville and Honky Tonk Central to offer paddlers a slice of lakeside Broadway, with aquatic-themed drinks and live music (respectively). Several other partnerships are being sought as well.