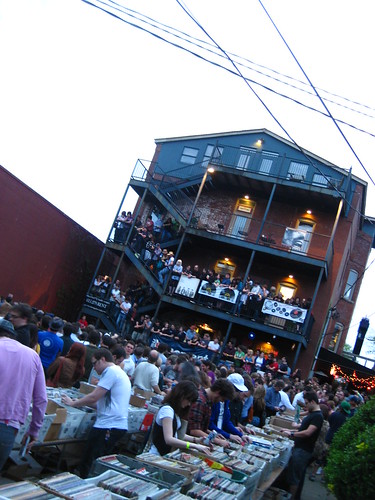 The past year has been a rollercoaster for record stores in Nashville. The Great Escape closed their midtown location after 33 years. We lost (and then got back!) The Groove. Grimey’s has been shining in the national spotlight this year, reeling in one high-profile instore performance after another and chatting it up with NPR. And Jack White is out there somewhere rolling around in his record store, coming soon to a driveway near you! Needless to say, we’d be lost without our crazy local record stores and Record Store Day is one of our favorite days of the year. It’s coming up this Saturday, April 16, so get out there and support your local record stores! We’ve rounded up all of the local happenings so you don’t have to miss a thing.

Grimey’s has ordered every. single. one. of the 275 Record Store Day releases this year. Line up out back at 10am, because they’re first come, first served (and limited to only one of each release per person), and tackle the mountain of cheap music in their sidewalk sale while you’re out there. It wouldn’t be a Record Store Day at Grimey’s without Yazoo and BBQ, so there’s that. One of our favorite new additions this year is a partnership with the Nashville Film Festival (why must these things always overlap?) with three music film screenings in The Basement during the day. The performance lineup speaks for itself, so here you go:

Music films screening in The Basement:

And if you’re not Record-Store-Day’d-out by Saturday night, catch Cameron McGill (of Margot & the Nuclear So And So’s) and What Army w/Miles Nielsen and Builders and Butchers at The Basement ($7).

The Groove is offering 15% off everything except Record Store Day releases all day. The day’s entertainment will be provided by Hacienda, The Coolin’ System, Magic in Threes, Bad Cop, Evan P. Donohue, Faux Ferocious, The Shakes, Nite Nite, Chris Crofton and DJ sets from The Record Wranglers, DJ His & Hers and Nashville’s Dead. Drop by for giveaways, goodies, some (maybe free?) beer and to scarf down a (definitely not free) Mas Taco or two.

The aforementioned rolling record store will be parked at the Third Man non-rolling record store, oh, and Jerry Lee Lewis will be there too. Not quite the free-for-all that most Record Store Day events are, tickets will set you back $30 (but c’mon, you know it’s worth it). As always the show will be recorded with Jack White producing, and the pressings will hit the shelves at Third Mans ASAP. Don’t go to Third Man expecting to find all 275 of the special RSD releases, but they will be stocking two White Stripes reissues, a new Karen Elson single and Danger Mouse and Daniele Luppi present: ROME starring Jack White and Norah Jones.

UPDATE: The Jerry Lee Lewis show sold out so fast that Third Man moved it outside and added another 300 tickets. You can still get your hands on them here, but the price has gone up to $50.