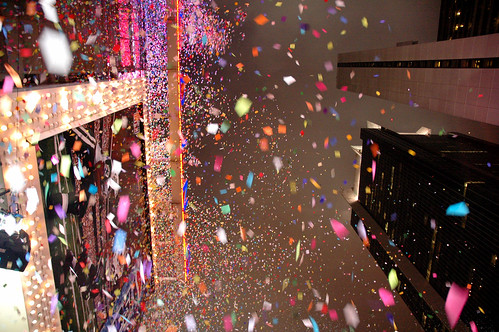 Nothing like waiting until the night before to make your New Years Eve plans, right? Every year, we swear we’ll be partying in style… next year. Then, when next year rolls around, we find ourselves in the same place – On the couch. Now, there’s nothing wrong with settling in for a quiet night at home, but if you’re looking for something to do and just can’t seem to find anything fun, Nashville’s got you covered. Here are (just a few) of our suggestions for being out & about tomorrow night.

Music City’s Bash on Broadway (with Guitar Drop), 7:30pm, 1st & Broadway, free. After a failed attempt at unloading $250 concert tickets for last year’s NYE celebration, the Nashville Convention & Visitors Bureau is throwing this year’s party for free. This time, they’ve put together a lineup of music for the night including Rodney Atkins, Jonny Lang, Tommy Sims, Marc Broussard, the Dirt Drifters, and Gabe Dixon. And our city is so rock ‘n’ roll that we’re dropping a guitar at midnight (instead of a lame glittery ball), then shooting off some fireworks because that’s how we roll. We’ll be hooking you up with road closures in a separate post, so stay tuned!

Dine in style. Enjoy a low-key, fancy-shmancy meal with some champagne and other little perks, depending on where you decide to drop your dollar. Downtown Details has the scoop on fixed-price evenings at Capitol Grille, Sambuca, Prime 108, The Melting Pot, Nashville City Club, Flyte, Sole Mio and Merchant’s, and the Nashville Scene has the deets for dinner at Sperry’s, The Wine Loft, Urban Flats and more.

Mercy Lounge’s HAPPY ENDINGS. 9pm, $25-75.
The Mercy Lounge has been hyping up their crazy “Happy Endings” shindig for the past few months, promising “the wildest fairytale world you’ve ever seen,” “more fun than Willy Wonka’s Chocolate Factory” and a “mind-blowing midnight countdown filled with lasers and drenched in complimentary champagne.” While we take a moment to recover from reading the description, head over to MercyLounge.com to read more about the indoor snow fall, interactive video walls and other shenanegins to expect on NYE at Mercy. Buy your tickets in advance (like, now) if you expect to get in. PS: The Cannery’s party is already sold out.

McFadden’s New Years 2010 Glow. 8pm, $30-50, 21+. We’re really only recommending this because it promises glow jewelry, glow sticks, glow PAINT… and get this, MUCH MORE TO GLOW. We can’t exactly claim to know what that means, but it sounds like there’s going to be a rave at McFadden’s, and that’s something we’d like to observe from a safe distance.

If you just want to catch a show and drink some beer, Nashville Cream has things covered with a pretty thorough roundup (and a hilarious flowchart) of the evening’s happenings, and Metromix covered everything else.