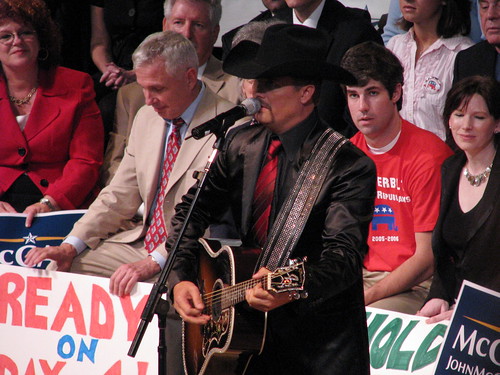 If John McCain is going to be anywhere in the vicinity, then we know John Rich probably isn’t too far away. Tuesday’s debate is no exception since we’ve just learned that Rich will be at the Belmont Mansion early Tuesday morning to show off his rhinestone Wranglers to the world on a special live filming of the CBS Early Show. According to one undercover Nashvillest operative, the school sent out an email about it to student leaders this morning:

– We encourage signs of support for the candidates, school spirit & colors, and shout outs to Mom & Dad!

– Please pass along this information to all members of your student organizations. We would love to have all the students and faculty staying on campus during Fall Break to come out and show their excitment for this election on our broadcast!

Best we can tell, the event doesn’t look like it’s open to the public given the tight security on campus that day, though we couldn’t reach anyone at the Mansion for comment. Looks like this is one debate festivity we’ll just have to pass up. But for posterity’s sake, we’ll leave you with this:

Audio clip: Adobe Flash Player (version 9 or above) is required to play this audio clip. Download the latest version here. You also need to have JavaScript enabled in your browser.

UPDATE [3:53pm]: The Tennessean Election blog points us to this article saying that members of the community are invited to attend the CBS Early Show taping. So if you feel like scraping yourself out of bed at 5:30am, then go for it! And take pictures!