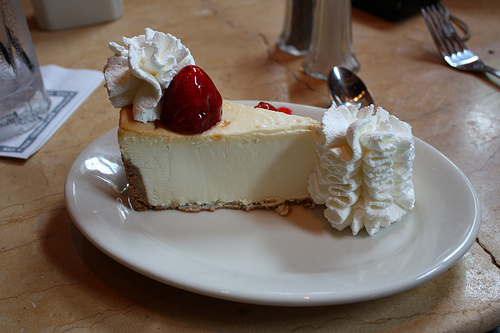 Not quite free, but close enough that we’re really excited – The Cheesecake Factory is celebrating their 30th anniversary by offering $1.50 cheesecake slices today. A slice of cheesecake will normally set you back 7-9 bucks, so we definitely appreciate the offering.

To kick-off the anniversary celebration and in commemoration of National Cheesecake Day on July 30th, 2008, The Cheesecake Factory restaurants will offer every delicious slice of its more than 30 varieties of cheesecake with a dollop of nostalgia by featuring all cheesecakes at $1.50 per slice, limit one per guest, dine in only, on that day—as they were when the restaurant first opened in 1978.

In addition, a special, limited edition cheesecake, the 30th Anniversary Chocolate Cake Cheesecake, will be introduced on July 30th with $0.25 from the sale of each slice sold this year benefiting the national hunger-relief organization, America’s Second Harvest – The Nation’s Food Bank Network. Additional activities will be announced throughout the year.

Three cheers for The Cheesecake Factory!