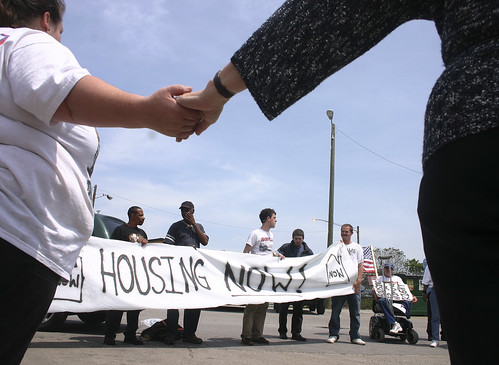 Good morning, Nashville. It turns out our homeless were busy yesterday, marching through downtown and taking over an abandoned HUD home near Dickerson Road. The group, led by local nonprofit Nashville Homeless Power Project, were trying to make the point that houses shouldn’t be empty when people are living on the streets. Unfortunately the folks at Housing and Urban Development didn’t see it that way and had three people arrested and cited for trespassing, including NHPP’s Program Director Jeannie Alexander. Brian Sullivan, a spokesman for HUD’s office in Washington, DC told the Tennessean, â€œItâ€™s a point we appreciate but we donâ€™t advocate breaking the law to do it.” The group is already planning another demonstration for May 28th to defend Wednesday’s actions.