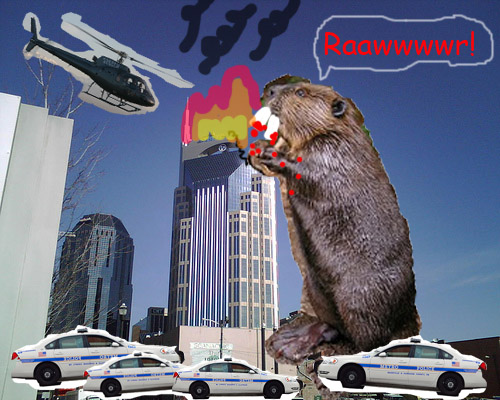 Good morning, Nashville. There have been some indisputably great moments in Nashville’s history which have included everything from #TheSituation2010 to last year’s Christmas Tree Fail, but what happened last night may well have topped them all. Reports began to surface yesterday afternoon that a dead human body had turned up in Bellevue. Sad, right? A few hours later, local news stations began to report rather sheepishly that this was no ordinary human body, but rather the body of a “very large beaver.” Obvious questions aside, how does one mistake a beaver for a human? And furthermore, how big does a beaver have to be before it can be mistaken for a human? WKRN reports, “The Nashville Fire Department said a beaver had gotten stuck in an awkward position and had its paw raised in a position that resembled a human’s hand.” The beaver was stuck in an awkward position, you say? Please, tell us more! Because we can’t actually imagine a way in which this story could get better. At any rate, you can become a fan of the Giant Bellevue Beaver on Facebook and help us cement his (awkward) position in a long line of American heroes who will enrich Nashville’s history for many years to come. Or at least until our next Christmas tree tips over or it snows outside or Charlie Neese draws us another NSFW doodle on the weather map by accident.

Very Accurate Artistic Representation the Giant Bellevue Beaver by us.